Skip to content
Covid-19: we are still open as usual. Find out how we are keeping our customers safe during this time 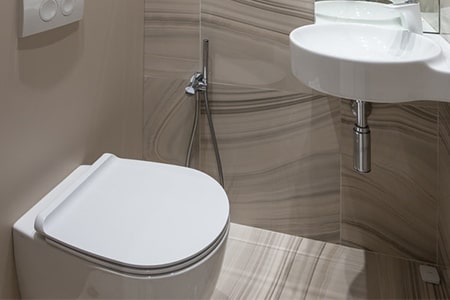 The proper function of your toilet is top of the mind for most of us. They come in all shapes and sizes but in reality, most have the same basic parts. If you’re all interested in saving some of your hard-earned money by being able to fix a few plumbing-related issues you should make yourself familiar with the innards of a basic toilet.

Today, we’re going to take at the flapper. We’re not talking about the alcohol-crazed, short skirt-sporting short-haired androgynous 20s renegade; we’re talking about the toilet. Hold all jokes, please. Welcome to perhaps one of the most intriguing, yet one of the most hushed, topics ever fathomed—we’re talking, of course, about the topic of toilet flapper types. And again, we don’t mean the 1920s, drinking girl.

What Is a Toilet Flapper?

The flapper is an integral part of the tank of your toilet. Maybe you’ve used a toilet before that looked like it “never stopped flushing.” The water would just keep flowing, and flowing, and flowing, and perhaps you even feared that a flood might occur because the water simply didn’t stop. Perhaps now you can see why toilet flapper types are such an interesting subject. Without them, we wouldn’t have automatic toilets.

The Critical Role of Toilet Flappers

Believe it or not, the toilet flapper types you may have installed in your toilet are the only thing keeping the water from flowing from the tank down into your bowl, so we’re talking a critical piece of machinery. When you flush your toilet that’s what generally lifts the flapper which stops the water. The toilet flapper, usually made of rubber, is connected to the flusher by a chain.

So when you press down on the flushing handle, the flushing handle pulls the chain up via a lever and lifts the flapper, thereby letting the water through to “flush” everything down your bowl and into the drain, replacing it with new water.

How do you know it’s time to replace the toilet flapper? As it turns out, there are a number of telltale signs that your flapper is crying out for help. It’s by recognising these signs that you can predict a potential toilet flapper catastrophe before it happens and prevent the unspeakable.

By this point, you understand that toilet flappers play a critical role in one of the most important devices in all of our lives—the toilet. We also know how to detect that your toilet flapper might be crying out for help from you, its owner, and it’s up to you to respond to that call valiantly, lest you have a real mess to deal with, like a flood of the unspeakable. And yet, we have not yet addressed a key question. What are the three major types of toilet flappers, and how do they work?

These days, rubber flappers are totally in, and the other styles are totally out. If your toilet was built in this century, chances are it’s made of rubber. As we mentioned before, the rubber flapper is like a little hat or stopper that covers the drain of your tank. It’s attached to your flusher, so when you pull the flusher down, the other side of the flusher lever inside the toilet goes up, so it pulls the rubber flapper up. This lets all the water escape the toilet’s tank and flow down into the toilet bowl, cleansing all from the bowl and washing it down the drain of the bowl.

As the name states, these flappers are made of a rubber material which is virtually impervious to water—at least for a very long time. Rubber is also very flexible, and so it can withstand being moved up and down thousands of times without breaking. It’s durable and reliable in that regard, and you want a durable, reliable piece of equipment guarding your home from potentially costly leaks which could otherwise turn into floods.

If the chain is just short enough to only partially lift the tank ball flapper, a weak flush will result, because only some of the tank water will flow through, and then only a trickle. This is problematic because the requisite force and volume of water necessary to execute the bowl flush successfully will not occur, making for highly unsatisfied toilet users watching an unflushed toilet.

Disk flappers are fundamentally different from the other two because rather than use the force of the flusher to open up the tank’s draining hole into the toilet, disk flappers let the weight of the water open and close the tank hole. Because of this, however, these special, older flappers tend to break more quickly because of the constant pressure back and forth on the seat disk flappers.

Basically, the seat disk itself covers what’s called an “overflow pipe” so no water can get into the toilet. When you flush the toilet, the whole of the flapper rotates, and the overflow pipe is now open to water coming through it. There are both threaded seat disk versions, and others which are not threaded. After enough water drains out of the reservoir, because the water’s weight is what had been holding the flapper open, it shuts off when enough water has drained out.

One of the reasons this type of flapper is seldom used besides their propensity to break is that they’re on the humongous side compared to the others, taking up most of the tank. This also makes it more difficult to, say, configure your toilet to use less water and be eco-friendly in that regard. There’s simply no end to the number of repairs needed for the disk, which can get cracked, resulting in that dreaded ever-flushing toilet.

All of us have been in that situation where a toilet’s failure to function correctly left us in a lurch. Most of us prefer the modern conveniences of modern toilets to the old outhouse our grandparents may have told us about—you know, the cabin in the wood that you’d have to venture out into at night if you wanted to use the “bathroom.” Thankfully, we don’t have to leave our homes to use the restroom today, and modern toilets make our towns so much more sanitary than they’d be if they had never been invented at all.

Thankfully, since the early days of mechanical flushing toilets, improvements have come about such that toilets are even more reliable today than they’ve ever been. Now, we understand one of the critical components of the flushing valve, the toilet flapper, and the respective toilet flapper types built to most durably endure the ins and outs of the toilet’s daily, weekly, and annual flushing regimen.

By better understanding and recognising the type of toilet flapper your system is designed to handle, the next time you’re in need of a speedy replacement, you’ll know just what to tell the man or woman at the hardware store when he or she asks, “What type of toilet flapper do you need?” Better yet, call an experienced plumber and tell them! You’ll be glad you did.

How to Avoid the Biggest Winter Plumbing Problems